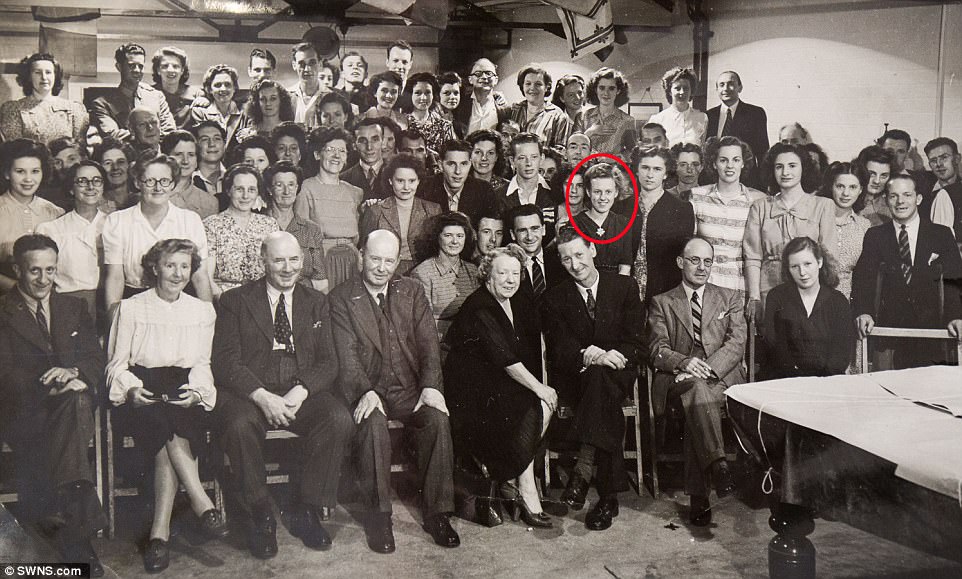 She now works for the great-granddaughter of her first boss, and still does the books three days a week.

During her career, she has filled out roughly 42,000 payments forms, only ever failing to account for a 2p deficit back in 1959.

Monica, moved to the company after working for the British Iron and Steel Control in Leamington Spa, Warwickshire.

To mark her milestone, Monica has received a letter of congratulations from the Queen, and the Guinness Book of World Records is currently verifying her status as the UK’s longest-serving employee. 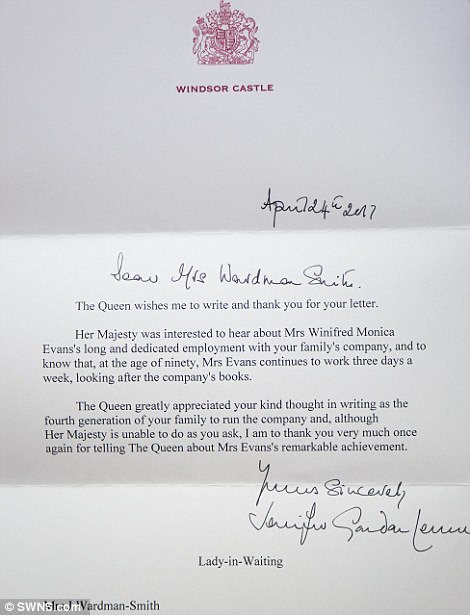 Monica, who had no children but was married to husband Kenneth for 50 years before he died in 2008, started on a weekly salary of 12 shillings and six pence.

She said: ‘My memory isn’t what it once was, but the first day is still in there.

‘I was nervous, which I think is normal. I was only 19, and it was a big step. My office hours were half nine till four back in those days, and I took the bus in to make sure that I got in early.

‘At first I was in charge of recording the workers’ mileage. You’ve got to remember that this was 1947, immediately after the Second World War, so many things were still rationed, and petrol was one of them.

‘That meant that I had to be extra careful. I took to it well. There were only two other people in the office on that day, and it was a nice atmosphere.

‘The people were very friendly, very welcoming. I just felt comfortable right from the start, and I think many other people have had that experience too.

‘Of course I couldn’t have seen myself working there for 70 years at that time. But I felt settled, and I wanted to be there for a long time.

‘I’ve never had any offers to move companies, and I don’t think I would have looked for work elsewhere either.

‘Kigass took a chance on me when I was young, and have always been very good to me. Because of that I feel a lot of loyalty to them.

‘The fact that it’s a family-run company has always appealed too.

‘When I started there, I was working for Charlie Wardman, and now his great-granddaughter is my boss. It’s been wonderful meeting different generations of the family, and I’ve seen them all grow and change.

‘Nowadays people tend to change jobs quite quickly, but if you enjoy what you do and are committed, then there’s no need to change.’

Monica, who claims she has never been longer than ten minutes late to work, has ‘hardly ever’ taken sick leave.

During her time at the company, the pensioner has overseen the reigns of 15 different Prime Ministers.

She married childhood sweetheart Kenneth, who died in 2008 at the age of 79, in 1958 and went on a honeymoon to Bexhill-on-Sea, East Sussex, with the factory worker.

The pair endured heartbreak in 1964 when Monica lost a baby due to complications six months into her pregnancy.

The book keeper, who is renowned for her extreme attention to detail, once kept her five-strong team behind hours after work to explain a 2p deficit.

She said: ‘It’s the only time I’ve not been able to explain a loss.

‘No one was allowed to go home until we found out what had happened.

‘It sounds silly, by today’s standards, but you have to be able to balance the books if you want to run a successful business.

‘My team were very accommodating, and understood that we needed to sort it out, but we never got to the bottom of it. I love working for Kigass – it has been my life and will continue to be important to me.

‘When I started work, there were six members of staff working in Regent Grove, Leamington Spa and the Wardman family lived above the factory.

‘In the early days, I was employed on switchboard sometimes and the owner Charlie would call down to me when he had an issue on his mind and say, ‘Get me the Prime Minister’. He was a wonderfully eccentric boss.

‘I find that much more manageable, I’m not sure that I could work full-time anymore, I’d get too tired.

‘Every now and then I’ve had the occasional crazy moment where I’ve thought about retiring. But what else would I do? I love my job, I love the people that I work with.

‘I wouldn’t want to be sat around the house doing nothing. So long as my health is good, I want to keep on working.’ 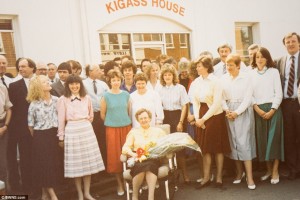 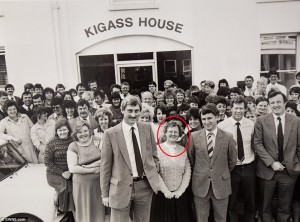 Director Joanne Wardman-Smith, the great-granddaughter of Charlie Wardman, said: ‘Monica is an important part of Kigass and represents what the business is all about – family values and great staff.

‘I often take her out for lunch for a catch-up, but when she returns to her desk she insists on working the extra time to catch up her hours – she is that sort of dedicated person who goes beyond the call of duty and has done all of her life.

‘We have talked about retirement, but there are no immediate plans as far as Monica is concerned.

‘It’s amazing to think that she was using pen and paper when she first started, and is now fully up to speed with internet banking.

‘Everything she does is on the computer now, and she’s taken to it like a duck to water. She’s an inspiration, and she will have a job here for as long as she wants one.’

Kigass Aero Components Ltd., established in 1973, is a supplier of precision machined parts and assemblies.